Planting a Seed Is Just the Beginning

This grant was awarded to Pisgah Forest Elementary 5th grade Math and Science teacher Joshua Thaxton for 3 hydroponic vertical gardens. The $2380 TCSEF grant enabled Thaxton to introduce PFE 4th and 5th graders to a STEM-based agricultural project that supports many of the subjects taught in these grade levels.

What is a hydroponic garden? Technically hydroponics is a method of growing plants in water without soil. A nutrient solution is added to the water to feed plants, usually grown from seed. In these gardens, both water and lights are on timers, so that the seeds sprout under optimum conditions. 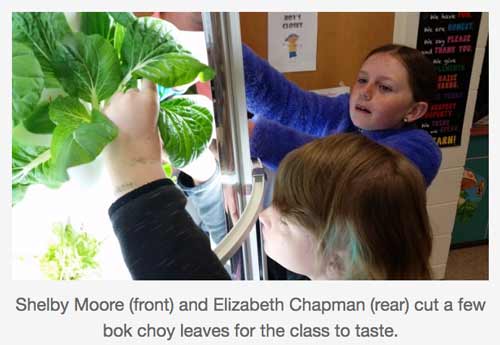 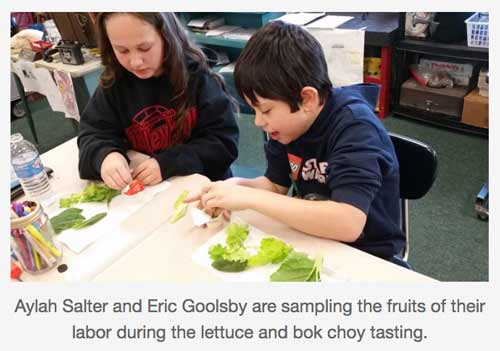 Thaxton’s class has a fully functioning garden–tower, cage, grow lights. Another fifth grade classroom and a fourth grade classroom have a tower and cage. Since the TCSEF grant covered all the towers but only one set of lights, Thaxton rigged up full-spectrum lights in the other two classrooms. The additional lights were funded by the PFE parent organization ROPE (Ranger Organization of Parents and Educators). A science and math teacher, Thaxton joked that this was the first experiment: which tower(s) would grow the healthiest plants? Which plants would grow most quickly?

So what’s going on here? Is this just some fancy science experiment? Actually, yes, but it’s so much more. This is what educators call project-based learning. Through this one TCSEF-funded grant, students are learning math, science, reading, writing, vocabulary, food science, and agriculture. They’re also learning “soft skills” like collaboration, responsibility, sharing, observation, cooperation, respect for others’ opinions–the list goes on and on.

To illustrate, let’s visit Thaxton’s Tuesday morning class. It’s a chilly March morning but inside, the bok choy , lettuce, basil, and tomatoes are thriving. A month ago the students had planted the seeds in specially formulated pods and placed them in the grow tower. Twice a week, one student is given the responsibility of checking the pH of the water, notifying the teacher if an adjustment is necessary.

Today is harvest time and the children are excited. First Thaxton gifts me with a beautiful head of lettuce; this is the beginning of another experiment. One table is given a new pod and instructed to plant new lettuce seeds. Another table is given scissors to thin out the larger lettuce leaves, leaving the smaller ones to continue to grow. After the class defines the term “thinning,” they begin to speculate which of the pods will grow better, which will be healthier, which will be ready to pick more quickly–the new pod or the thinned ones? Thaxton asks them if some heads were thinned more heavily than others, would this make a difference?

Then it’s time to harvest. As each table group comes up to the tower to “scalp” a head, they put their lettuce leaves into a tub. The next experience will be a tasting one. But before that, it’s time to harvest a few bok choy leaves, too. Few of the students have ever tried bok choy, so now is the time. Which will they prefer, the bok choy or the lettuces? What is different about the taste of the bok choy and the lettuces?

The school cafeteria has generously donated packets of salad dressing for the taste test. Is the lettuce (or the bok choy) better with or without the dressing? “The lettuce is pretty bland without it,” one student admits. Another student has never tasted French dressing before–and likes it! Is the bok choy spicy or bitter? They talk about the surface, body, and after-taste. (Very refined thoughts about the palate!) Once the tomatoes are grown, can they have a salad-making contest? Questions, answers, ideas, predictions, process, observation–all in the matter of minutes as students harvest and enjoy eating the fruits of their labors.

At this point, Thaxton has the students clean up their places and open their science journals. He has six questions for them to ponder and answer about their garden, including one that asks, “What variable (light, weather, seasons, water, other) has the most impact on the growth of the plants? Why?” Their answers are intriguing.

One student speculates that it is the light because “the water isn’t running all the time–you can hear it cycle on and off–but the lights stay on all day.”

Another counters that it is the water because “the cells [pods], seeds, lights, and tower are there, but nothing happens until you add the water.”

“Perhaps we should have said other or all of the above,” weighed in another student. The group nodded in agreement, seemingly satisfied at least temporarily.

Predictions, the scientific method, data gathering and management, measurement, critical thinking, justifying your opinions with evidence, nature, growing things, life cycles, full circle experiments–all factor into these fifth graders’ single hour with Mr. Thaxton and the hydroponic garden. And after spring break, they will add their LearnPads to the project-based environment, with graphs and photos incorporated into a digital portfolio called Seesaw, so that parents can be a part of this TCSEF grant-supported scientific experience called hydroponic gardening.

Thaxton readily admits that none of this would have been possible without a grant from the Transylvania County Educational Foundation. Each year the Foundation uses the profits from its annual fundraising event Taste of Transylvania to award grants to worthy teachers. The grants themselves are competitive, with teachers from across schools and grade levels applying for projects that go above and beyond the school system’s annual budget. Last year, the Transylvania Educational Foundation awarded 25 grants worth more than $18,000.