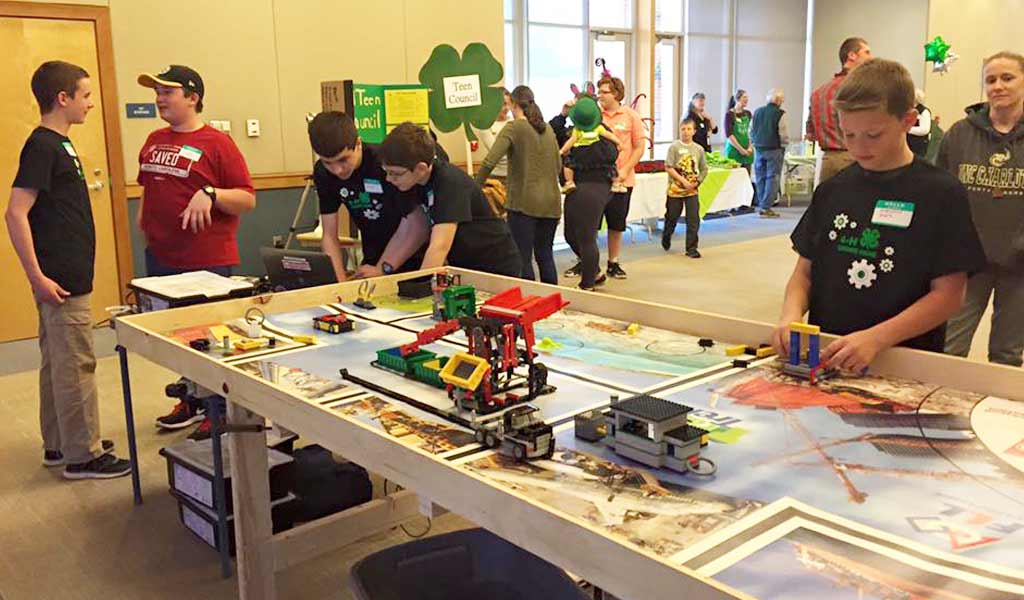 Transylvania County Schools is being invaded by robots–robotics, that is.  Across the county, middle schoolers are learning to build, problem-solve, explore, and collaborate as they compete in robotics competitions both formal and informal.

You’ve probably read about Brevard Middle School’s (BMS) success at both the regional and state levels.  In November their robotics team came in second in the regional Lego Challenge Competition and eighteenth in the state.

Competing in a Lego Challenge isn’t just a building block construction contest.  It consists of four projects designed around a theme.  This year’s theme was trash.  Middle school students not only had to design a robot that could complete a series of tasks–think drive up to, load, run, and unload a trash compactor–but, in the research component of the competition, choose an item that is currently not easily recycled in our community and design a system to recycle it more efficiently.  BMS students chose electronics recycling, learning how to scrap all those individual parts to collect a final weight of 425 pounds of recycled electronics for the competition! 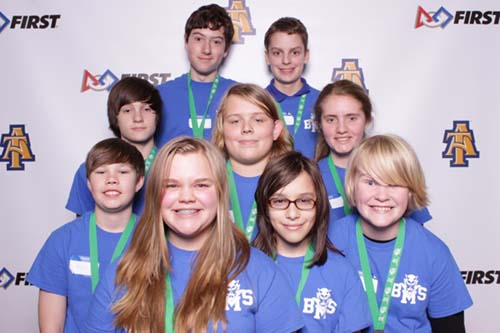 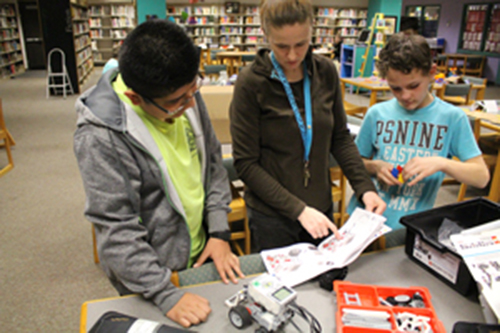 BMS AIG Teacher  Heidi Spradlin and science teacher Justin Ausburn originally chose robotics to support the AIG curriculum, but interest soon spread throughout the school.  Now during its second year, they advise an after school club that meets as frequently as two times a week and has up to thirty-seven members, all learning how to program Lego robots and eventually Arduino robots to complete tasks of their own design.

Yes, Brevard Middle School’s success warrants headlines, but much is happening in other schools across the county as well.  Rosman Middle School (RMS) has added robotics to the Career and Technical Education (CTE) curriculum.  Together CTE teacher Chris Owen and media coordinator Sarah Justice introduce eighth grade students to the science of robotics and where they already exist in everyday life. ( A great example is the Roomba robotic vacuum cleaner.)  Then they divide students into groups to take a bristlebot through a maze that they design themselves.  Using straws, cardboard, hot glue guns, and a variety of small objects, they maneuver a small nail brush-sized robot around corners, through tunnels, and over objects to win a high-five from their fellow students and Mr. Owen.

RMS students can also get in on the robotic action through their after school Lego Club.  When I visited recently, I watched a group of eight boys unpack two new Lego kits that consist of hundreds of Legos and its robot “brain” and begin to build.  Watching the group was fascinating.
One group methodically unpacked and sorted every piece into its proper compartment in the tray the kit provided. Another group just started building, opening several bags of pieces, piling them together on the media center table and improvising.  An interesting exchange ensued.
One student, obviously disturbed at the lack of order and process, admonished his friend, “We should follow the instructions.”
“Instructions are boring,” his friend countered.
“No.  Instructions are like laws.  We need them.”
“Lego instructions aren’t laws; they’re suggestions.”

Trial and error will eventually determine whose plan is more productive, but one can only imagine the life lessons that are going on during this exchange!
And there’s a lot of trial and error.  Students build their robots, program them on the media center computers, bring them to the specially designed table to run through their tasks, and then analyze what worked and what didn’t.  With AIG teacher Brandy Glendening and Justice asking questions to prompt students to re-think their designs, students go back to the computer or tinker with their robot’s design to ultimately “get it right.”

Yes, it’s a process and a design that teaches students (and teachers) to fail, problem-solve, test, and perhaps fail again.  They are using Math, science concepts, logic, creativity, and goal-setting, all the while learning to work together to complete a task.
Working together isn’t just for students.  None of this would have happened if not for a collaboration among Transylvania County’s 4-H program, Transylvania County’s Education Foundation, and the school system.

To get the middle schools’ started with robotics, Transylvania County and 4-H Youth Development Extension Agent Mary Arnaudin loaned both BMS and RMS Lego robotic kits.  A small cadre of teachers were trained by Dr. Misty Blue-Terry, 4-H STEM specialist at NC A&T, during a 2-day professional development session.  Since that time, RMS/RHS media coordinator Sarah Justice has trained Transylvania County Schools’ teachers and administrators in basic Lego robotics as well.  The Transylvania Education Foundation provided grants to Rosman Middle School for a Lego Challenge Kit and to Brevard Middle School for twelve Arduino Kits, and the school system has found ways to spread the science budget to help schools purchase their own robot kits.  This allows Arnaudin to share the 4-H “seed kits” with other schools.  The Brevard High School shop class even built the Lego Challenge table for RMS. Yes, robotics is spreading across Transylvania County, but it’s more than a simple after-school club or mini-class at the elementary and middle school levels.  It’s a commitment from educators in Transylvania County to provide relevant, engaging opportunities for students that help keep them interested and excited in school, opens their eyes to a possible future career, and teaches them such basics as perseverance, problem-solving, and collaboration.