If you’re familiar with the scent of solder, you’ll know what I encountered when I walked into Matt Tuckey’s Brevard High School Physical Science classroom. School hadn’t even started, but students were huddled together in pairs putting the finishing touches on their cars. They were alternating between the hot glue gun and the soldering iron, attaching wires and glueing batteries in place on their cars’ bodies. One pair of students was happily painting a plastic drink bottle, another pair was voicing frustration. Their car was only running backwards and in circles. When I inquired as to why that was happening, they confessed that they had put the motor on backwards. “It’s too late to change now,” they said. “We’ll just have to make it work.”

All this well-managed chaos was in preparation for the Battle of the Battery-Powered Buggies Challenge, an Education Foundation grant-funded project that Tuckey had designed to teach simple machines, power, motion, and dynamics. As one of the students explained, “We’re tying up the whole kinetics unit. We’re going out with a bang!”

The students had three separate challenges for their buggy. The distance/time race, the tractor pull, and the uphill climb. Students were given a gear set, a motor, a 9-volt battery and connections. They had to come up with their wheels, axles, and bodies using anything not originally intended for that purpose

And they had strategies to solve those problems. Rubber bands on the right back wheels might keep the buggy traveling in a straight path instead of veering left. The large wheels (made out of old CDs) might be more stable with weights in the body of the car. And slowness might not be so bad if the buggy went in a straight line all the way to the finish line! 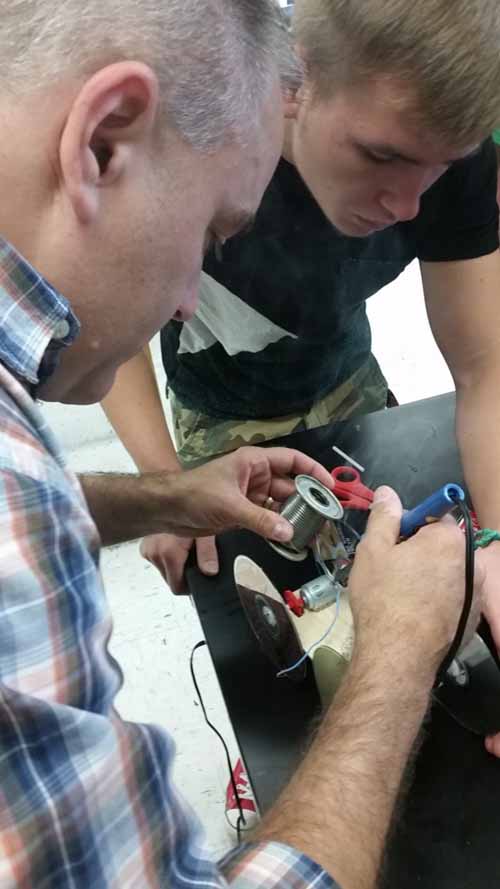 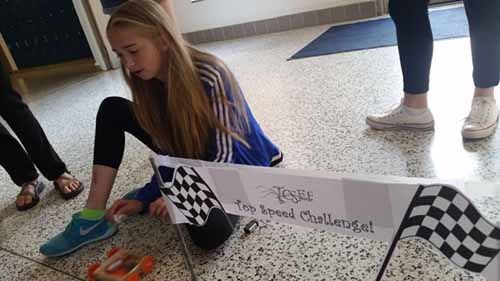 Mary Grace Aubrey readies her buggy at the starting line of the Top Speed Challenge portion of the Battle of the Battery-powered Buggies.

Soon after class began, Tuckey directed the students to the hall where he had set up a starting line for the distance/time race, the first of the three challenges. Each pair of students raced their vehicle individually, with Tuckey holding the stopwatch. They had three tries to go thirty feet. They received points for time and distance, with the ultimate winner receiving a few extra points on their final grade for bragging rights.

The race itself was fun, funny, and a learning experience. These students were well aware that this was a trial run and they would soon be competing with the other Physical Science classes who were working on the same challenge.

The first buggy to race was the one deemed “the cat car” because its owners had glued two cats to the body of the racer. It slowly rolled in circles half way down the track. The second buggie threw a wheel soon out of the starting line prompting one young man to half-jokingly ask, “Hey, does the wheel count as distance?” When one buggy balked and sputtered, the young lady asked Tuckey if they could use “their” battery. She had realized theirs was a used battery rather than new and so didn’t create such a burst of energy as the car started.

What was most fascinating about this whole experience? Everyone failed! Yes, every car got picked up by its students and taken back to the classroom for repairs, additions, or complete reconception. But the students didn’t see it as failure. As one student muttered, “Well, this will help us figure out what to do next time.”

It’s a perfect example of what educators call “failing forward.” Every buggy modification, every run on the challenge course or pull of the tractor added to the students’ understanding of motion, dynamics, and simple (and complex!) machines. Every change in design involved critical thinking and problem-solving. Add a rubber band here, tape the battery connections there: these were solutions creatively proposed and implemented on the fly.

Students were learning so much from a single project: not just motion, velocity, simple machines, traction, gears, how batteries work; but how to collaborate, problem-solve, think critically, and persevere. Perhaps the most important lesson embedded in all this creativity and fun? How to recover positively from failure–how to fail forward.

Yes, Tuckey’s Education Foundation grant was for $522. $72 for motors, $42.90 for gears, $209.50 for batteries, and additional dollars for small items necessary for the project. But as the commercial says, the lessons learned? Priceless!

This year’s Taste of Transylvania will be held on May 2, 2017, at The Lumberyard. For more information and to purchase tickets, go to http://tasteoftransylvania.org.