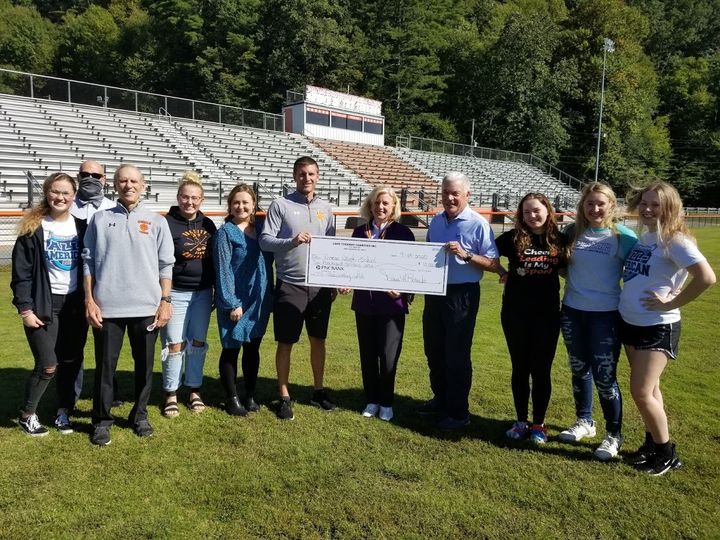 When Rosman High School Tiger cheerleaders suit up again in Spring 2021, they will have a new look all around. They will sport brand new winter uniforms, but they will also take their first steps into a mentoring program announced by Rosman cheerleading coach Shannon Vaughan-Patton and members of the Tiger Impact Group on Thursday, October 1.

Coach Patton began with the cheerleading program as an assistant in 2010 and teaches in the exceptional children program. Since cheerleading activities cut off abruptly in March, she said the effect on student-athletes has been long-lasting and dramatic.

“Unless things change we will have no ‘stunting,’ no contact, none of the ‘fun stuff’ including tryouts and camps that help cheerleaders bond and become a team. We still don’t technically have a team, but we know who our seniors will be, those most affected by this program. The timing for this could not be better, and I am really excited about the possibilities.”

Most noticeably, the Rosman Tiger cheerleading squad is slated to start the football season in February 2021 with new winter gear including warm-ups, sweats, and jackets for all 41 cheerleaders—21 varsity (20 female, 1 male) and 20 junior varsity student athletes.

Behind the scenes, T.I.G. has launched a suite of campus programs from a speaker series to advising programs, with the goal of establishing 1-to-1 mentorship and support systems for students on the road to college and career readiness.

Former educator Bob Graham said that Lake Toxaway Charities designs T.I.G. programs interactively with teachers and administrators, in order to build on strengths in the school community. From coaching and mentoring to internships and scholarship assistance, the group’s vision extends from elementary school to degrees and credentials after graduation.

“We can and will focus on academics for students to succeed,” said Graham. “But my own personal belief is that building up the morale, the spirit, and confidence of students, parents, and the entire community is a very important first step.”

Coach Patton said that the collaboration will take small steps, starting with the surprise announcement to the team and introductions to adult volunteers.

Potential mentors include two former college cheerleaders who cheered for their Tigers—Jean Merritt from LSU who will head the program, and Cindy Bishop from Clemson. As the program grows, it has the potential to serve every student on the team.

Merritt helped organize the Lake Toxaway Charities campaign aiming to raise $10,000 for uniforms. Pledges so far total over $13,325. This positive response has organizers shouting out their donors and looking cheerfully toward the future.

“Cheerleading has made a big impact on us in positive ways,” said Merritt. “Just being in an environment of positive energy in today’s crazy world is critical for both girls and boys.

I grew up with two older sisters close in age, so I always wanted to be out there and be heard.”

The uniforms are a visible form of support, added Merritt, while mentoring inspires T.I.G. volunteers to engage with children where they need it most. She noted every high schooler’s to-do list now includes managing the effects of the pandemic on reaching their goals in school and life.

“Being flexible and adaptable is definitely something cheerleading taught me. And leaders emerge—leaders are grown. If we can touch someone’s life and guide them in some small way to make changes for the future,” then she said the program will be a success.

“Students didn’t know about this connection beforehand, but we are so excited to establish this network of relationships,” said Coach Patton. “This mentoring program with the Tiger Impact Group has potential to help students dream bigger, and I hope it empowers them to see school and life decisions through a wider lens.”

Bonding as a team and the joy of competition have been absent so far from the cheerleading experience so far this year, says Patton, especially with teams in North Carolina unable to attend camps or hold formal tryouts.

“This is a great chance for building camaraderie and strong relationships,” she said. “It has been a struggle for students to feel part of a team all this time. Our cheerleaders will be able to learn about adapting to changing life circumstances and staying focused on their goals, which is what I want most for all my cheerleaders and students.”

To generate revenue, cheerleaders typically sell ads in the seasonal sports programs. Without that opportunity this year, the new uniforms come at a critical time for the team which expects to cheer for football games in February and March..

Patton noted the cost to attend FCA cheer camp is twice that of a typical football player’s fees, so donations are crucial to sustain the program. She also noted the mentorship program was born thanks to the initiative of someone with Lake Toxaway Charities who saw cheerleaders working through similar challenges in another state.

“Cheerleading is a part of these students’ lives for now,” said Patton. “And cheerleading may help them take the next step in college, which is great. But helping students see things in a new light, supporting them toward achieving their goals—that will be a real asset for every student who participates.”